MREs are increasingly present all over the world and their implementation requires acoustic impact studies prior to their installation. To carry out those projects MAREE intervenes from the study phase to the in-situ measurements.

In 2009, MAREE in partnership with ALTRAN-Ouest, realized  ambient noise acoustic measurements to establish an initial state of the site of a future tidal turbine park close to Brehat island. In 2011, MAREE and ALTRAN-Ouest made a similar measurements after the prototype tidal turbine deployment on site in order to study the effects  of the turbine radiated noise.

Various recordings have been done following the same measurement procedure as in 2009. It has been done by means of a vertical array, engine stopped with the boat drifting. This is a rather basic and limited method but it is easy and safe to handle in a very hostile place with strong currents.

Thank to these new measurements , it has been possible to characterize some specific noises due to the device. 2009 and 2011 ambient noise were similar and the sediment transport noise was clearly identified. 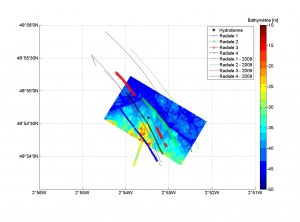 Bathymetry and localization of the measures